I received some money for Christmas, so I decided to buy a parchment craft starter kit. I’ve been wanting to try parchment craft for a long time.  It is so pretty, but it looks like it would be difficult and time consuming.

I ordered a starter kit from www.paperwishes.com and was totally blown away when it arrived just 3 days later. Either it was a slow week for them or they are doing something right in their shipping department!

The kit had everything I needed except something called “white spirits.”  Sounded kinda creepy to me, but a quick search on the internet revealed that what I was looking for was turpentine.  A quick trip to Michael’s solved that problem.

The kit contains seven patterns arranged by difficulty so that each one builds on the skills gained in the previous project.  The first card was straight tracing and embossing.  Here’s mine: 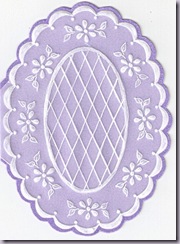 It looks pretty good at this resolution, but if you click to enlarge it, you’ll see several mistakes.  I did a bit better on the second card.  I plan on giving it to my mother for her birthday. 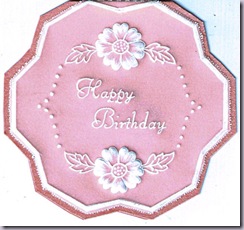 The third is a book mark and for it, I had to color the paper, which is where the “White Spirits” come in.  The previous two may look like they are colored, but they are just mounted on colored card stock.

I plan on giving this to a friend as a gift, but I’m not sure how to protect it.  I was thinking about putting it in a plastic sleeve, but I don’t know where I’d find one the right size.

Posted by handcraftedgreetings at 9:27 PM

Email ThisBlogThis!Share to TwitterShare to FacebookShare to Pinterest
Labels: Parchment

Here are this week's freebies!